​
​These first two Ashley cars were seen by Trevor Pyman,
(a very keen cyclist, car enthusiast and contributor to this website).

This was back in 1968 and 1969 when he was cycling around
the Essex countryside.

They were both Ashley Sportiva Coupés
the first one he sighted on the 28th October 1969
was a Red Sportiva Coupé, it was up on blocks and looking a bit sorry for itself, there were no registration plates visible.
​ 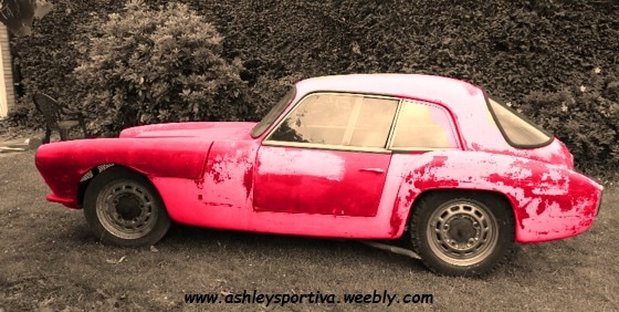 It was seen in a garden at the side of a house in
Ashingdon, near Rochford, Essex and would have looked similar to the Ashley Sportiva above.

The other Ashley he spotted on 19th January 1969
and it was a White Sportiva Coupé, his records
show these notes:

" This is an interesting one, first seen in a farm yard next to
a barn, the rear view only and I have it down as a white Sportiva (I guess it could equally have been an 1172), it did however have a square rear number plate type body, similar to the Ashley Sportiva below.

Every time I went by, which wasn't that often,
I looked for it but there was no sign of it.

However one day sometime in 1970 I saw the body of an old Ford Popular laying in the ditch by the side of the road at the entrance to the same farm, in a deep ditch, it was on its side and I wondered
why it would be put there like that,
(with hindsight maybe the farmer was hoping the local
gypsies might take it away).

Still no registration plates and I don't think the build was ever finished. To my shame I didn't note down if it was a Sportiva front
and I can't remember which it was now. 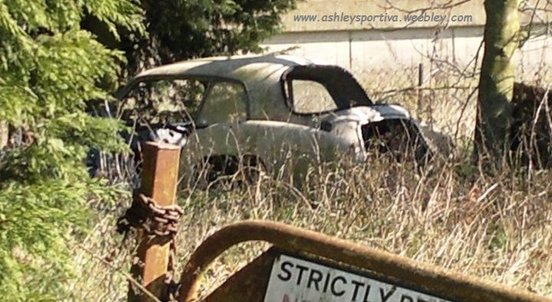 Photo courtesy of Wayne and Pistonhead.com
Wayne's post was:

Tuesday 20th March 2012
I have for some time (10yrs +) been passing this bodyshell and
over this winter the tarp cover has blown off.
I can't find the owner of the piece of land as yet
but wish to identify the car if anyone can help me.
It's not a Gilbern GT, having 2 Gilberns myself I've checked this.
Wayne.

I believe it's location is in Lincolnshire and the forum deduced that it is an Ashley Sportiva.
Is it still there or gone to be saved I wonder? 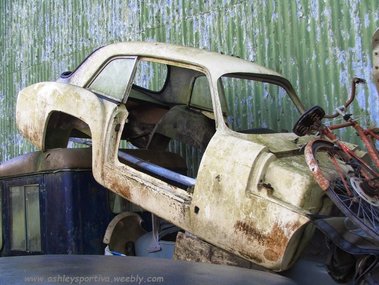 "It's next to a big shed/workshop right by the road in a place called "Three Holes",
not long before you wind your way into Upwell, Cambridgeshire.
If you come up the road from Littleport, via Welney,
you can't miss it's on your left, just before the turn left to March
As far as I know it's still all there"
​
So if you have any information about any of these
Ashley Sportiva cars