​In November 2011 I came across this Ashley Sportiva Coupe (with the top cut off) whilst surfing on the good old internet, of course.

It appeared on a couple of websites and is located across the water in France.

The following 2 photo’s are on Google images and have been taken from the  www.triumph-spitfire.forumpro.fr

The original photos were taken on 3rd January 2009 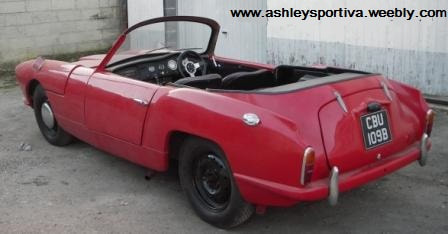 The photo below was taken on the 20th August 2004 or so the picture info states.

The body looks like it may have been stored for awhile and could do with a good clean and polish, the wheels are silver at this stage as they are in the next photo 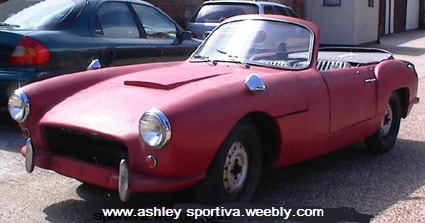 where the car is (or has just) taken a ride on the back of a trailer.


The only clue to the present owner was on the Triumph-Spitfire Forum site from which I found that a member ‘Gilles80’ had placed the top 2 photo’s, also that he was originally from Nantes but now lived in Amiens, France.

Wanting to know more I registered for the Forum, struggled with the online translations but eventually managed to add a message asking for Gilles80 to contact me, all to know avail as I didn’t get any reply.

I checked with the DVLA in UK and got the following info about the cars Registration.

I found it strange that the DVLA had the date of first registration as 1-4-2007 yet the CBU 109B is a 1964 registration number,
which agrees with the year of manufacture.

Unless it was made and registered in 1964 and was then off the road or out of the UK until 2007 and was re-registered.

I assumed that was the end of my investigation of CBU 109 B until on the 25th February 2012 I received the following email:

Hello
I own a convertible Ashley Sportiva for a little over 2 years.
It has an independent front suspension unit from Bowden; the motor is an 1172 100E.
This car is in France.
This car is not running yet, I hope to get this car to roll this year.

This, I think must be from my Forum message at last, but no Gilles had found my website and emailed me also sending higher resolution pictures of the 2 top photo’s.

After a few emails back and forth to Gilles in France, (fortunately Gilles has a 100% better command of the English language than I do of the French) we have with some documents that he obtained with the car, pieced together further parts of its earlier history.

The car was re-registered by the DVLA as CBU 109 B at Oldham C.B.C near Manchester on 1st April 2007

This was a very nice piece of kit to have as it was all new and required only the bodyshell to be added and the donor car drive train and motor, wheels, electrics, etc, it did however come at a high price which put it beyond the reach of most DIY sports car builders.

This Car was obtained in March 2005 by Mike Marczynski and was stored in his Classic Car Company’s workshop in Walkden, Manchester for the next 18 months,
so it may have been re-registered by Mike in 2007.


If you know anything else about this cars history, past and present, please email me at the following:
Ashley.Sportiva@yahoo.com.au

so that I can update this story on this site,
thanks.