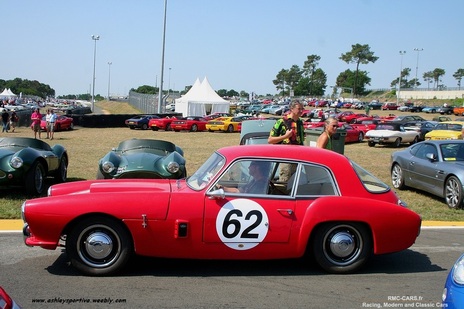 Photo courtesy of RMC-Cars.fr
I first saw this Ashley Sportiva on
a French website RMC-CARS.fr in November 2010, it was taken at the 2010 Le Mans Classic in July. 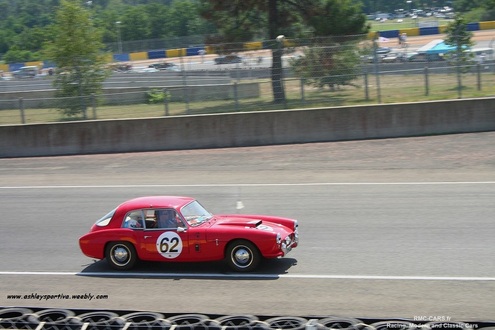 Photo courtesy of RMC-Cars.fr
There was no Registration No. shown on the photo's or mentioned on the website so I just filed it away in my system for future reference.

It was in the new year of 2012 that I came upon more photo's of the same Sportiva, this time at the 2011 NEC Classic Car Show and displayed on the Fairthorpe Sports Car Club stand and with the Registration No. in full view on one of the photo's. 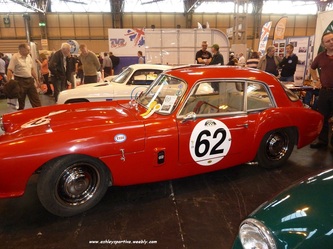 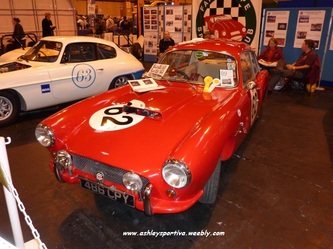 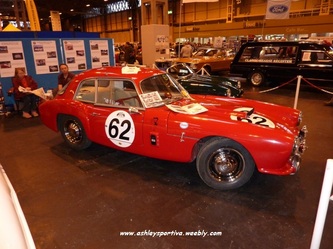 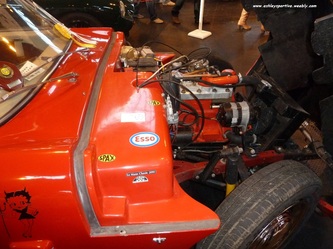 As the Sportiva was displayed on the Fairthorpe Sports Car Club display stand and I had the Registration Number I decided to contact the club and try and get the owners contact details.

I emailed the club with my details and a link to this website and received conformation in return that it was a club members car and that my details would be sent on to the member for him to contact me, this due to restrictions on handing out private information to unknown third parties, which was good to hear.

Unfortunately I never got contacted at that stage by the owner so the system didn't work for some reason. 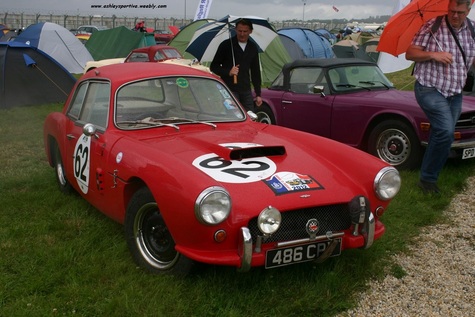 It was not until July 2012 that I received an email from Bart van den Acker,
a freelance automotive journalist, from the Netherlands:

Dear Sir,
A week ago I visited Classic Le Mans with three friends who qualify to be enough of a petrolhead to go there and appreciate all there is to see.

We were only there for about half an hour, when we stumbled across a car that was not known to me. I hate that! It was raining cats and dogs (as the pics show), so there was no one around to give some explanation. I pictured it and found a little logo on the back, reading ASHLEY.
The only thing that name reminds me of, is hardtops for Spridgets and Spitfires among others.

For the rest of the weekend we were submerged not just in rain, but happily also in cars of all kinds, including many rare birds. This red Ashley however kept standing out in my mind, as I have never known it before. 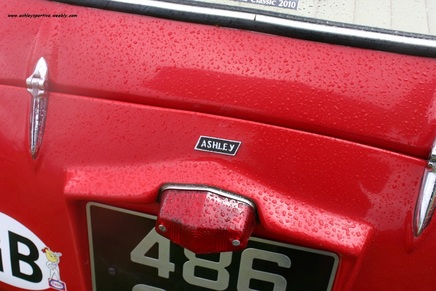 Photo courtesy of Bart van den Acker
Only today I have found some time to delve into my bookshelves and found in the Great Georgano that Ashley did make some kitcars as well, based on Ford components. From what I saw so far those cars resembled the one in Le Mans almost, but I have the idea this car is bigger than the Ford Popular or Anglia wheelbase.

Now I found your site, I read the piece about the Morgan based Ashley, which is more similar. Looking at my pic again, I can imagine the logo on the front is from a Morgan, but -stupid me- I never noticed that when I was near to the car.

I did not find this particular car in your listing, so maybe this example is not yet known to you. If I can add to your website like this, I am glad to do so, but please can you shed a bit more light on this car?

I was pleased to see that the website had been of use to others apart from Ashley owners and I supplied all I could to Bart to help with the Ashley story.

Once again the above club comes into the story, as whilst reading their website message page in October 2012 I noticed a For Sale advert regarding an Ashley 1172, the message also mentioned another Ashley the member had so I asked if it was 486 CPY and it was so contact at last.

Steve and Anne, the owners of the Sportiva, are Classic car restorers and run the Rusty Bug Workshop so little wonder the Sportiva looks so good.

For more photo's of the 2010 Le Mans trip see below and for the full story of the trip with all the ups and downs of classic motoring run your cursor over the page index on the LHS of this page to bring up the sub page or just  "Click Here".

I came across some photo's of what I first thought was another Sportiva until I noticed the Rego No. was familiar, but the car had had a colour makeover and was towing a Mirror Dinghy.
Had there been a change of ownership or what?

I not sure where the photo's had been taken but the Flickr page had a small location map shown with Ripon, England marked,
so it may have been there, they had been taken in July 2013. 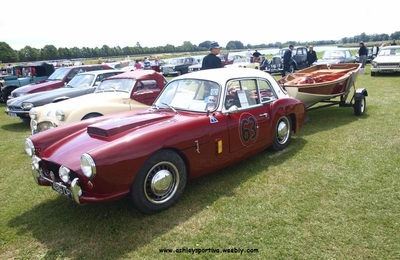 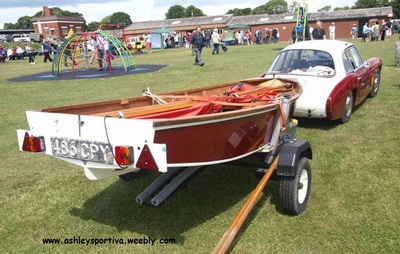 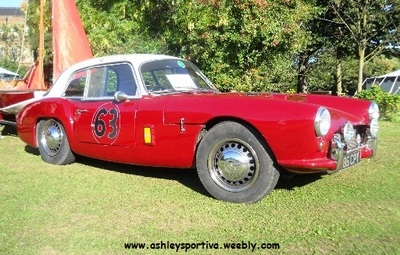 I was going to contact Steve and Anne again to see what the story was but before I had done so I found some more photo's on Flickr.com

These had been titled as being taken at Malvern, England
in August 2013 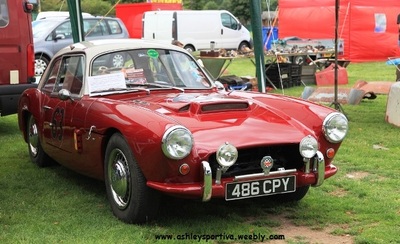 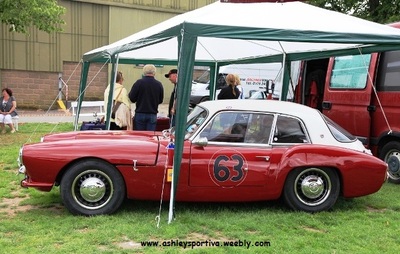 
It was time to get that email off to Steve & Anne, this time I did and this is their reply:
﻿﻿Hi Ivor
How strange - only yesterday I said to Steve that I should send you an update!!
We still own the car but Steve put it onto new running gear, (I will come back to you with the exact details), we repainted her in the "Rusty Bug" colours.  At the same time we took up sailing last year as a relaxation from the garage - my brother asked if we would like the boat that my dad built in his garage when I was a kid & used to sail - we thought there was a nice synergy with 2 'home made' vehicles & of the same era. The boat is a Mirror Dinghy
I will get back to you later re the finer details on the makeover
Anne ﻿﻿

I'm looking forward to getting the full makeover update

Well, once again that was nearly two years past, it now being

September 2016﻿
And I came upon another Auto website called
"Andy's Arty Auto Images"
I started looking through them and came across a set of photo's from the Saltburn Historic Hill Climb, this was run by the Middlesbrough & District Motor Club and was held on Sunday 11th September.
Some great cars and shot's by Andy, but a couple immediately got my attention 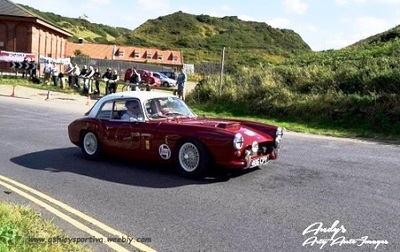 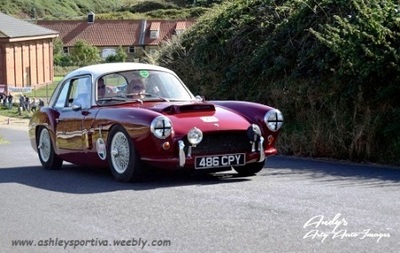 Photo's courtesy of Andy's Arty Auto Images.
A quick note to Andy to get his ok to use the photo's,
thanks Andy
and we have the latest car event detailed right here on the
Ashley Sportiva pages.

Check out Andy's other photo's by clicking Button below.
ANDY'S PHOTO'S

then please email me on
Ashley.Sportiva@yahoo.com.au