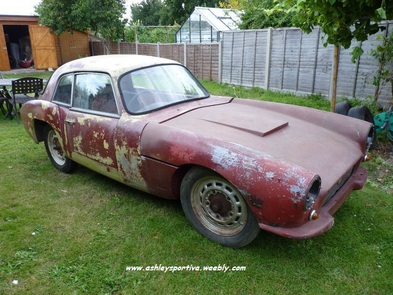 Photo courtesy of Mark Ranger
This Ashley Sportiva was first seen by myself on an eBay Auction listing in August 2011 with the following descriptive text page and photo's. 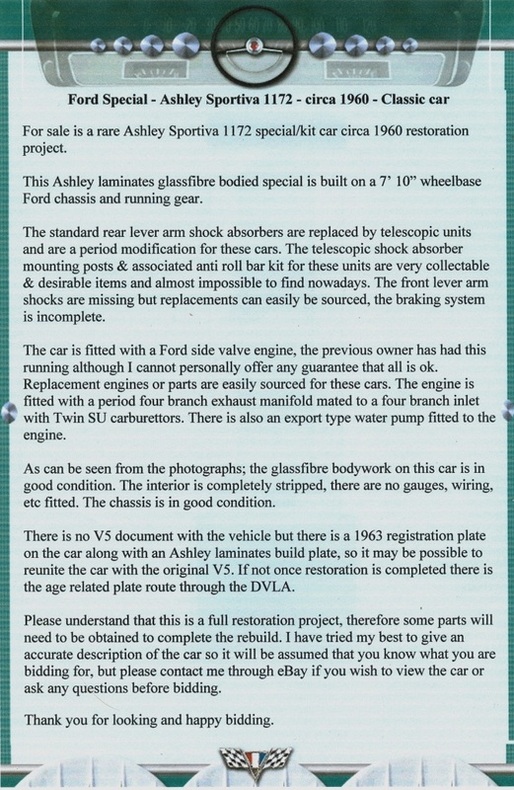 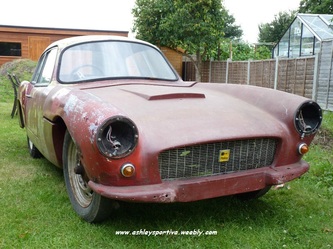 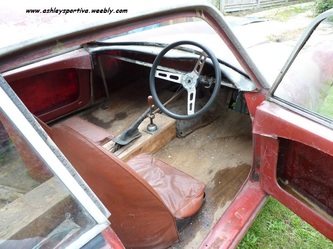 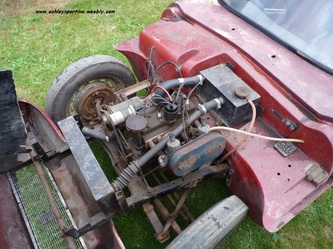 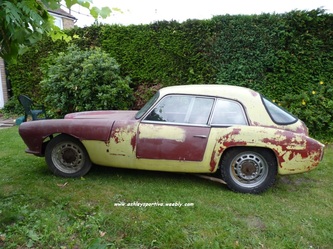 I noticed that the eBay Auction had ended with no sale being made, so I sent a few questions to the seller to find out more information but received no reply at that stage, it wasn't until early November 2011 that I received a reply via my email.

Sorry for my late reply to your email sent to me through eBay. I have seen your website before.
I did sell the Sportiva to a guy who lives in Basingstoke, I’ll try to find his details and send them through to you.

Please find attached a few pictures.
I’m afraid that I do not know much of the cars history only that the chap that I bought it from was called Ian Buckler & lived in Kent. He had owned the car for a number of years but had never got round to doing any work on it. 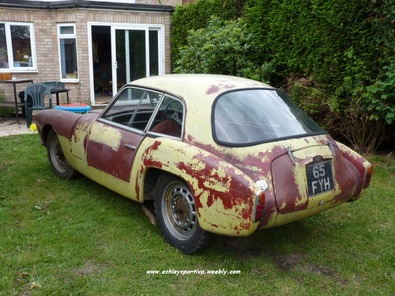 ​​To be honest I bought it as part of a job lot of two cars, the other was an Ashley 1172, similar to the Sportiva but with a different front end.
I needed some spare parts for my Ashley 1172 and the one that he had was a total wreck but had good windscreen & rear screen, unusual wheels and a front telescopic shock absorber conversion as opposed to the standard lever arm set up. 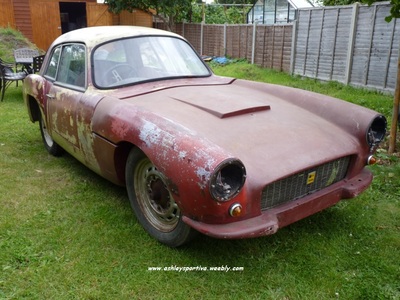 Photo courtesy of Mark Ranger
​Hope the
above details & pictures are of interest to you, Ill try to send a few more through as they are quite large.

I had intended following up on the Ashley 1172 that Mark had mentioned, however it slipped through my filing system memory and was lost until recently when Chris, another Ashley 1172 owner/restorer was telling me about the eBay Auction from 2011.

Mark indicated that I had all of the above information and that the buyer was from Basingstoke and Chris, who also it turns out lives there, has offered to try and locate the car.

Hopefully I will be able to follow up on the restoration/rebuild at a future date.

​Unfortunately I had know further contacts and
​the car was not located.

Then by June 2014 the car
was again on eBay, this time by the new owner
Keith Newton.
​I contacted Keith for his story since 2011 and managed to get some photo's from him and eBay.
The photo's show the arrival in 2011 at the farm
in Basingstoke and the
barn to be home for the next few years.
Anyway the Sportiva was sold and Keith
passed on my contact details to the new owners
​which resulted in the following message:
​Dear Ivor,
​
I am writing, as my wife and I are the ones who have purchased the Ashley Sportiva reg # 65 FYH.
We are two Australians living in Nottingham and hope to complete a sympathetic restoration on the car and in time take it to rallies and weekends away. We chose a Sportiva for its kooky looks and for the fact its one of the few UK GT's that you can fit kids in the back.

Keep up the good work on the website.
Regards
Dik and Amber
​
Well, as you can imagine I was very excited to hear that fellow Aussies living in England had purchased the Sportiva, (a reversal of my own Sportiva story).

I replied and we swapped a few emails back and forth, Dik had arranged to pick up the Sportiva and drive it direct to Burford to display at the Historic Specials day in the Cotswolds on 10th August.
Then
"DISASTER"
That weekend I had another email from Dik to say
that Keith had rang him to say that whilst in the barn that the Sportiva was being stored in, one of the farm hands inadvertently backed a tractor into the car damaging the body shell and breaking both the front and rear screens.

​These photo's show the extent of the damage! 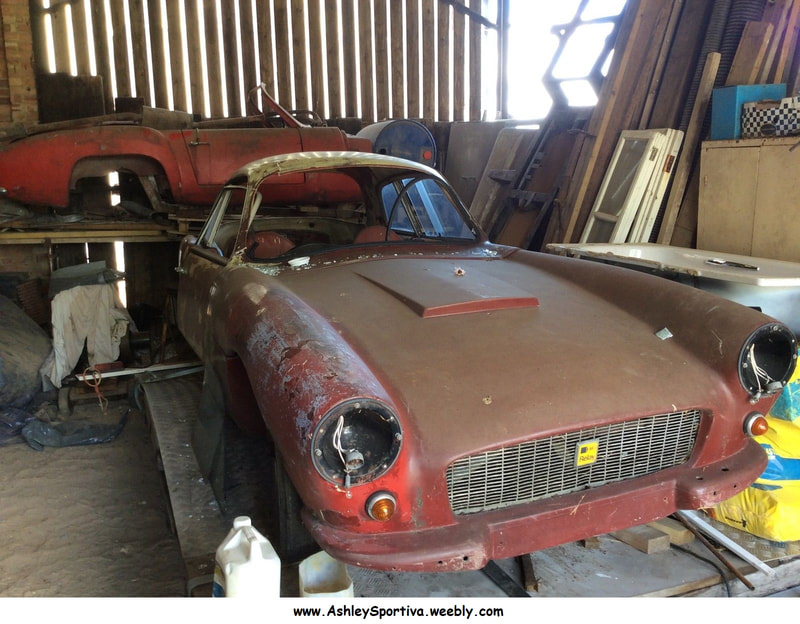 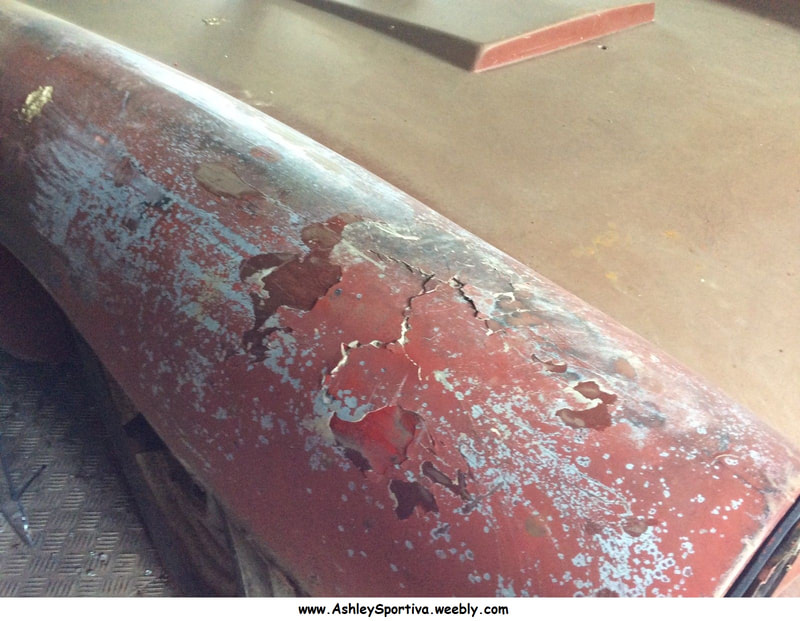 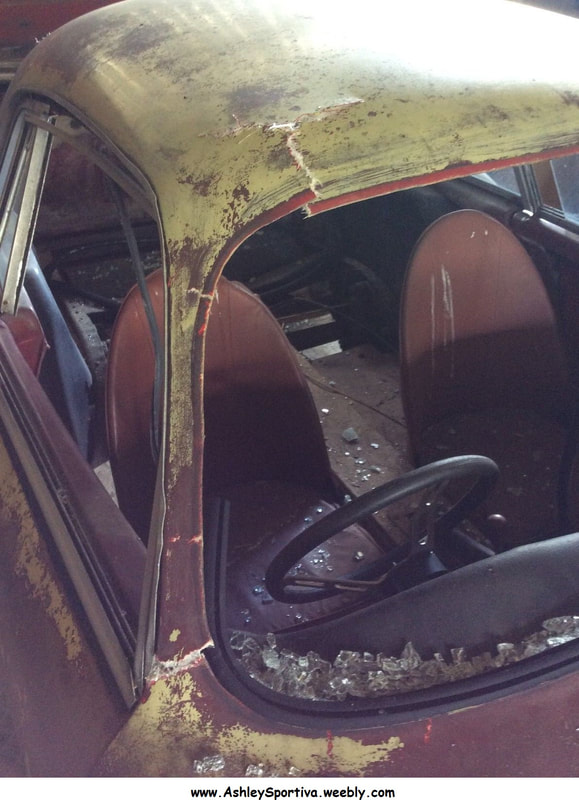 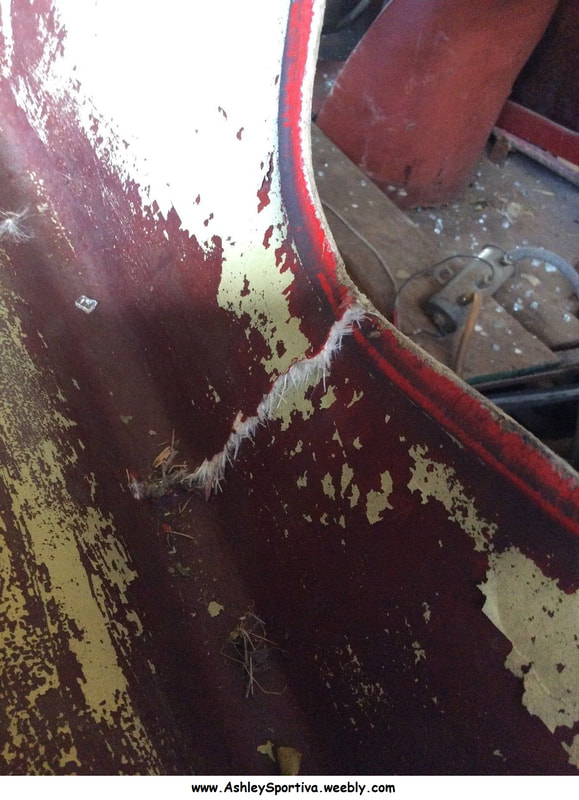 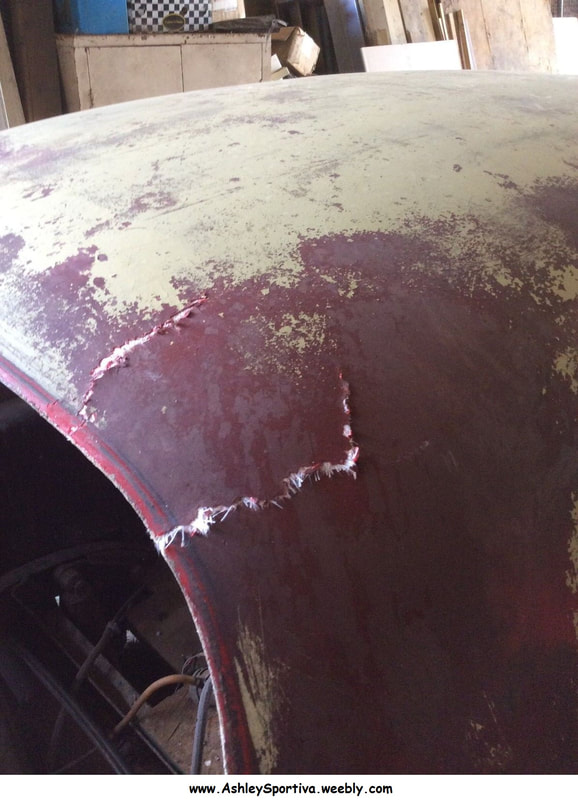 I exchanged a few emails with Dik and shared a few Ashley Sportiva spare glass screen leads that I had with him, he also discussed the options with Keith.
​
It was finally decided that all monies paid by Dik
would be refunded and Keith would keep the car
to assess the future of the Sportiva.
Then by Oct 2014 the car
was again on eBay
Keith had decided to sell it as was, with
the Damaged bodywork and without Glass screens. 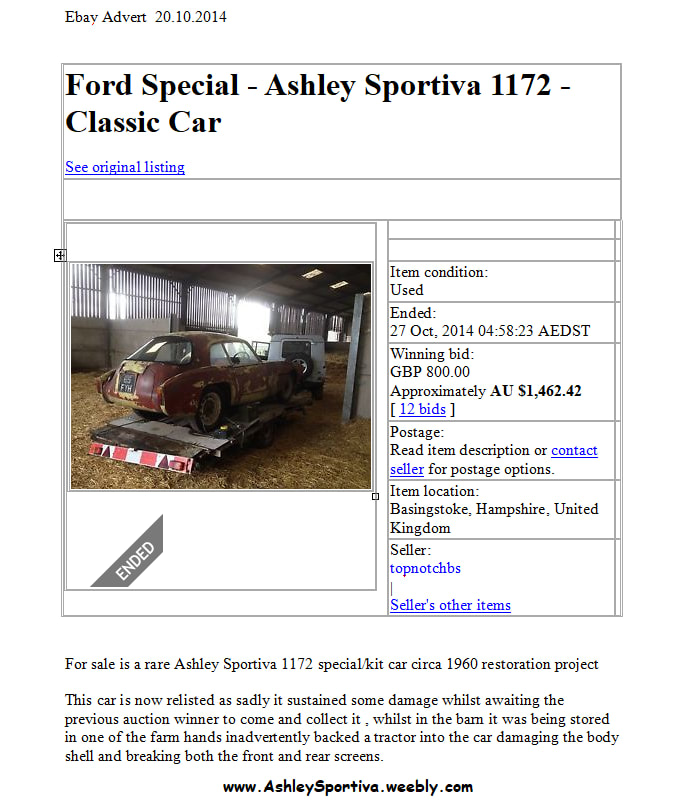 I contacted Keith to enquire about the new owner
and he sent back this note:
​
Yes, I did eventually sell 65 FYH and it was collected a week later by Maggie and her husband
​from Worcestershire and I suggested that they contact you for any help especially with the replacement screens.
​
However it was not until April 2018
that they did, still better late than never!
This was their message:
Hi
Could you please advise us on how we can go about obtaining registration documents for our Ashley registration number 65 FYI.
We would be very grateful for any advice.
Phil and Maggie Gregory.
I sent them some contact details of people and groups that might be able to help and asked for details of their ownership and work that they might have done since they purchased, also could they send some recent photo's for this their webpage.
​But it was not until  November 2018
that they replied, this time with some photo's:
Hi, just to let you know the above car is in Worcestershire.
We have had it 4/5years, it has had some work done on it and we did try selling it on eBay last month unsuccessfully. It is for sale and should you know anyone interested please let us know.
​We have been unsuccessful at getting any registration documents as the documents related to its first registration were destroyed. It appears that if it can be restored and seen by the club then a V5 can be applied for. Hope I am right in that assumption, we have no time so have decided to sell.
We have done mechanical work and got the engine running and it runs sweetly. The fibreglass damage has been repaired.
​We are looking to offers over £3000
Many thanks
Maggie
The next I heard was in August 2020
when I was told of another eBay Auction
for the Sportiva.
I contacted the seller as I noted that it was
not the Gregory's this time around and asked
if he would like to add the details of his ownership.
Hello Ivor,
I'll be happy to add all of what little I can to your archive. As currently the keeper of a couple of less elderly kit cars I realised that much of the pleasure I was deriving from ownership was less from the driving and more from refurbishment/alteration/maintenance of the vehicles.
For this reason I bought 65 FYH as a long term project not realising that contrary to the previous owner's suggestion, gaining a new registration most often entailed far more than a simple request to DVLA.
The FSOC opened my eyes to the facts and I soon realised this was not going to be the type of project I had hoped for and that I had bitten-off far more than I was prepared to chew.
The previous owner of Kidderminster had acquired
​65 FYH in 2014/15 from your previous known owner in Basingstoke and I subsequently bought the car in March 2020, during this time I don't think anything at all had been done to the car.
My sale of 65 FYH has been agreed and the car will be moving to Yorkshire this weekend.
I had discovered your web pages during the time I was considering my purchase of 65 FYH. I think it is a wonderful insight in to an important little chapter of motoring history. Those years must have been exciting times and I would like to think it is the type of motoring scene I would have been part of.
David Evans.

​Within the few days of hearing from David the new
owner contacted me having taken delivery of the Sportiva:
​Good Evening Ivor
Just to let you know I am now the proud owner of this Ashley Reg. plate number 65 FYH, looking at I believe this to be an original plate as all the bolts are so rusty it defo' looks like it has been on it from day one.
Eng No C232558 Chassis no 1916
Purchased today from Yate in Bristol and now residing in a small village in East Yorkshire.
Having had many years experience building and racing various cars the last being a '65 Marcos GT a new chapter lands in the workshop.
​
Any help on the car you can give would be most helpful. I have read your blog on the website about the car however from the last post the poor thing has gone into further despair having had a number of parts raped from her mainly the windscreen, seats and rear screen plus it now needs a lot more TLC on getting things to fit correctly but I have fixed up a lot worse
Hope to hear back from you soon.
Regards
Martin King
I replied supplying as much information as I could regards the car and the fittings needed and giving a possible source for new windscreen, etc, and received this reply:

Hi Ivor
Thank you for the email I actually live in a small village in East Yorkshire.
As I have had a good start on removing what is left already we have found a lot more work than first thought as you do! It is going to be more of a long term project as I am looking to retire in a couple of years time so then will be able to give it more attention
However I have to be honest I am arranging a mate to come and look at the state of the damaged body as he is a fibreglass specialist, so we might even be looking at scrapping the body and building a Ford side valve special with a wooden frame and aluminium body on the 103e chassis.
This would be a real sad day to make that decision but unless we can get more information from looking at complete cars this maybe the route we take.
As it has had a right butcher at it in the past who has just ripped out everything even the flooring, etc and not left anything to build up from. All the bulk head area has been ripped out two bits of ply laid on the floor it would not have been to bad if someone had the brains to take some pictures, no wounder the chap I got it from was overwhelmed and wanted rid of it.
However I have had 40 odd years building rallying and racing cars in every format going, so looks like its going to be a long haul.
The good news is I have managed to find a front windscreen so I will be purchasing that as we need to be able to see how far out the twist on the body is after been hit. The main concern is we have managed to get the doors open and now they will not shut at all due to miss alignment.

Martin
​
Martin's reply was very worrying as there might be a possibility that the body is replaced and a new Aluminium body built to replace it, depending on the damage done by the tractor crashing into it at
Keith's Basingstoke farm.
Martin would like to see a restored Sportiva to see what the restored car would look like, so if anyone within say 100 miles of York, Yorkshire has one restored and is interested please contact me.

If you have any more information about this
Ashley Sportiva car
Registration No.
65 FYH

(originally registered at London C.C. between May to December 1963)
please email me
​0n
Ashley.Sportiva@yahoo.com.au
OR
or use the contact page on this site to contact me