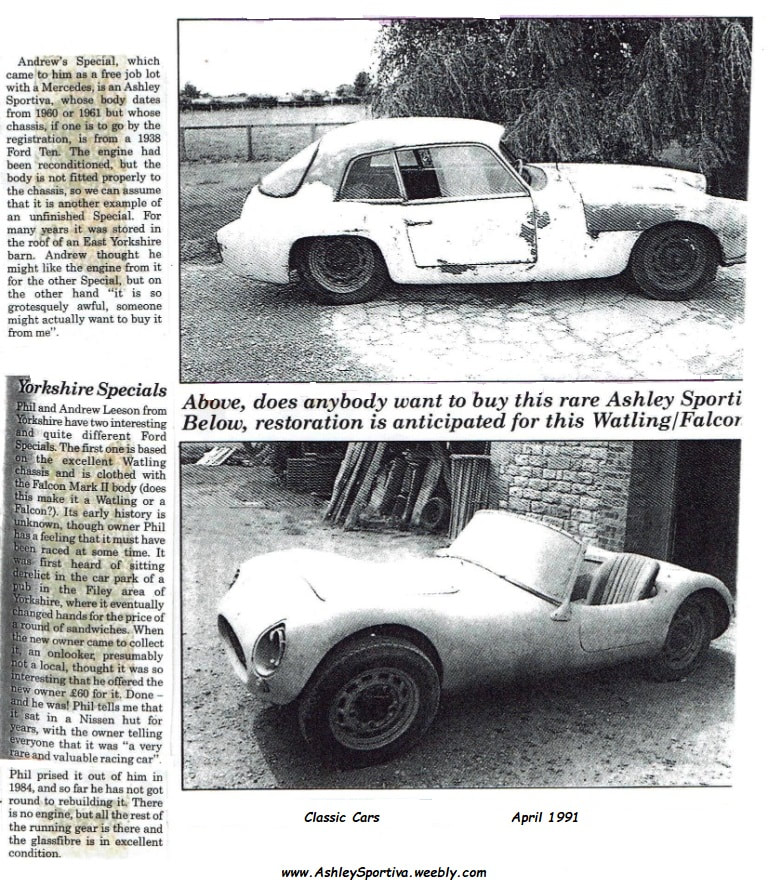 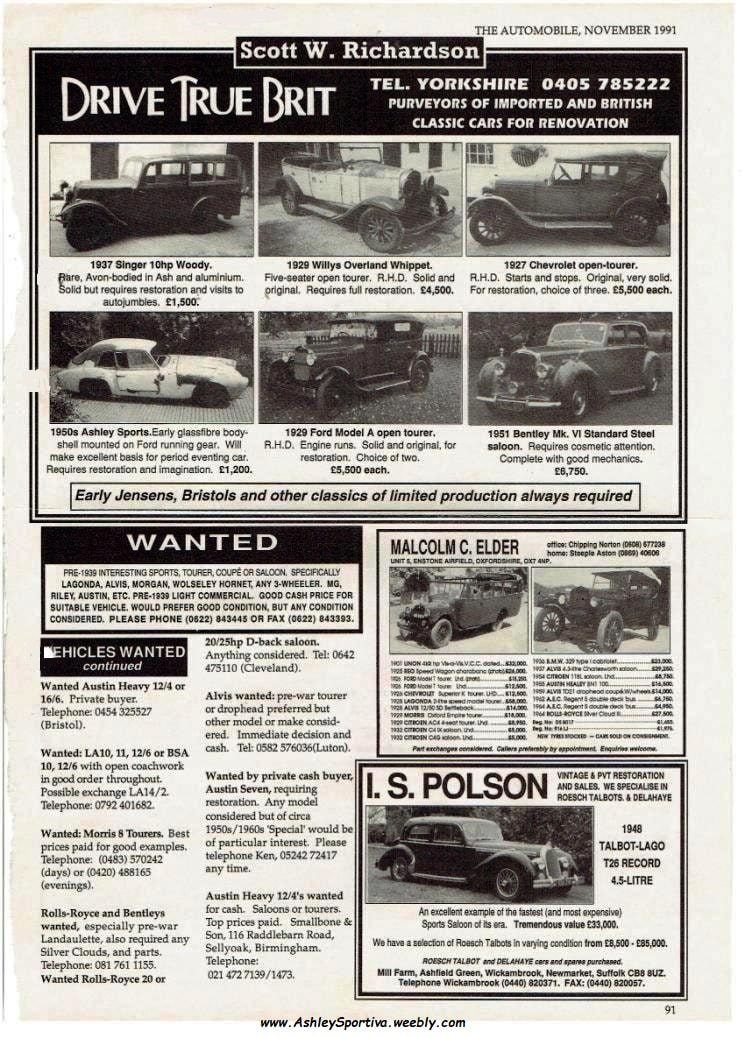 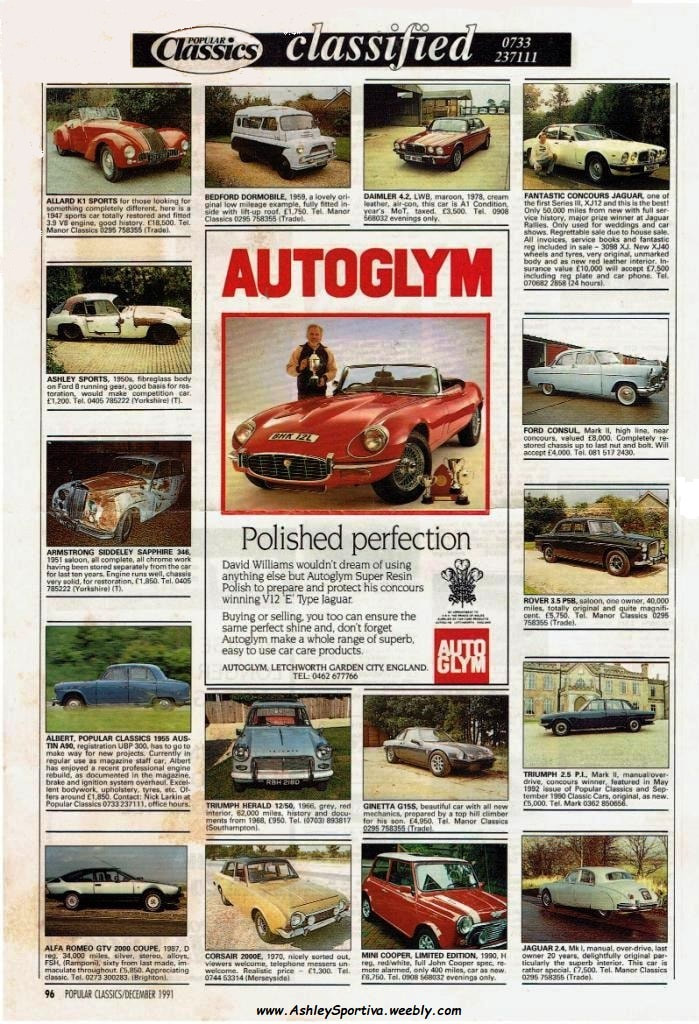 In 1991 it was owned by Andrew Leeson, and between April and December of that year he had it advertised at least 3 times,
​see adverts above.
I have tried phoning Andrew but the number was non-active, not really surprising after all these years.
​
That is all the information that the Fairthorpe S.C.C had so
I just filed the it all in my "Unknown Ashley Sportiva" file.
​
Then in November 2019  I received
an email from Jouke Bloem in the Netherlands, he sent a couple of
photo's taken by one of his friends in a wood about 50km outside Oslo,
and he asked if I had any information on the Sportiva.
Jouke is a writer for a Dutch Classic Car Magazine. 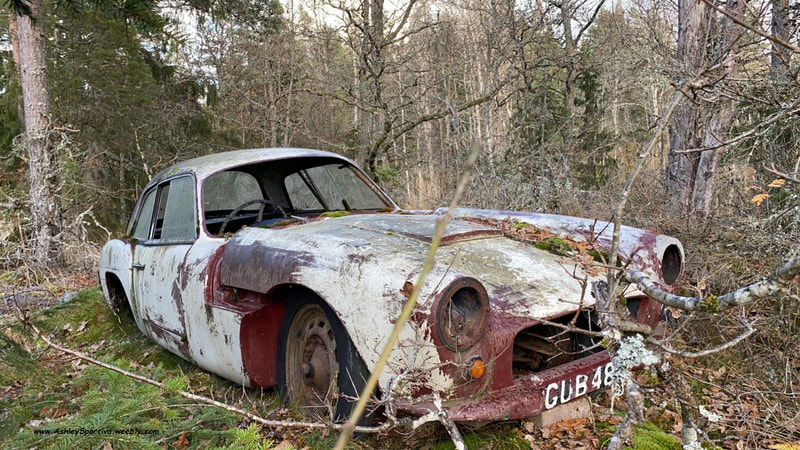 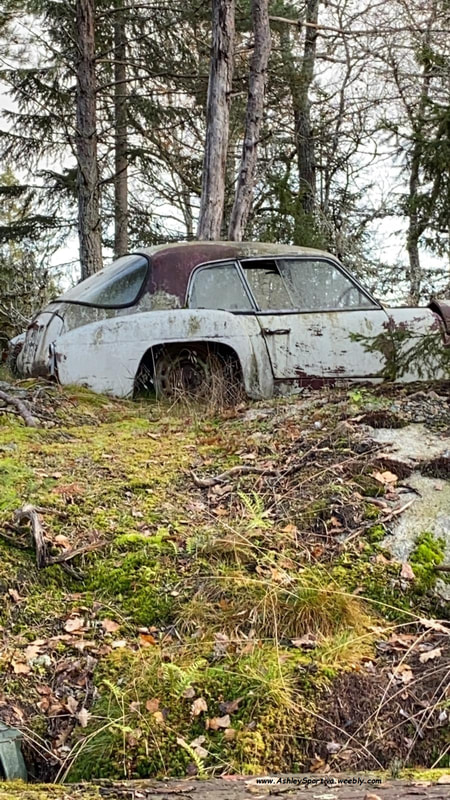 I looked at the photo's and it immediately reminded me of the
FSCC photo's in my "Unknown Ashley Sportiva" file and this time it
had a Registration Number.
I checked with the DVLA Database but none of the 10 possible numbers
came up with details.

​However I was able to let him know that it was Ford 10 based donor car registered with the Leeds C.B.C between July & Oct 1938.

​
It was a couple of days later that I had some more photo's and
a short video from Jouke, taken on site by Jesse De Jong. 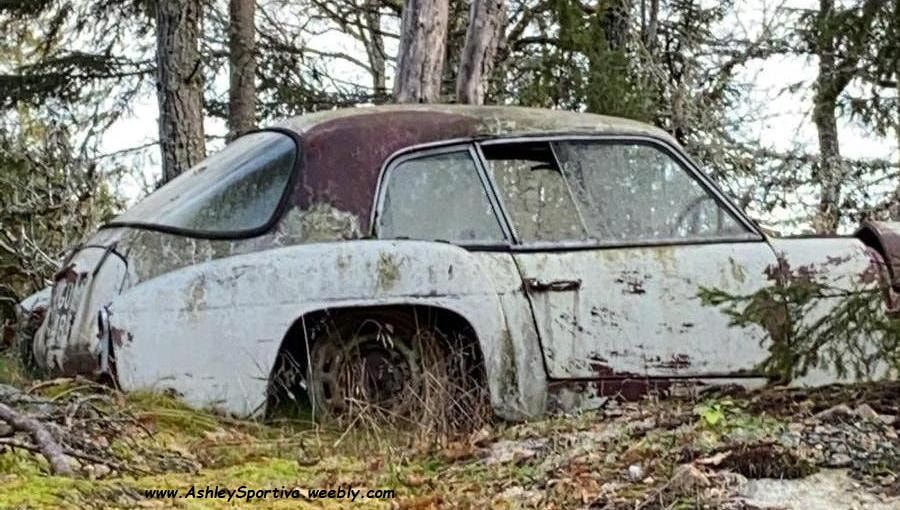 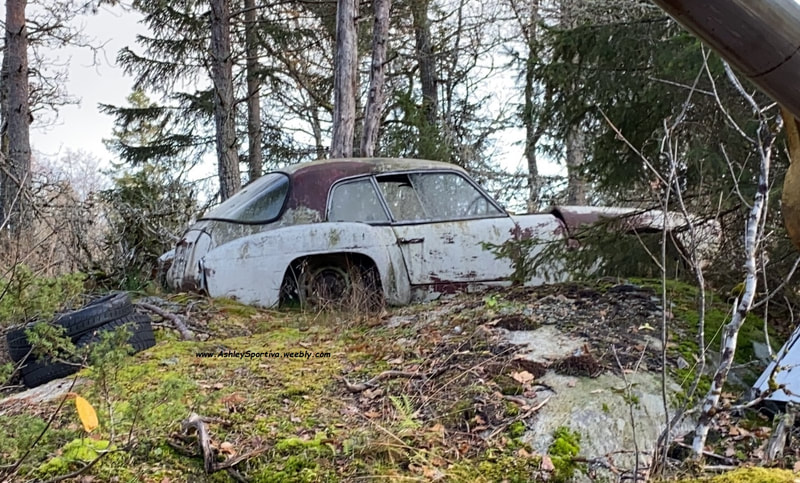 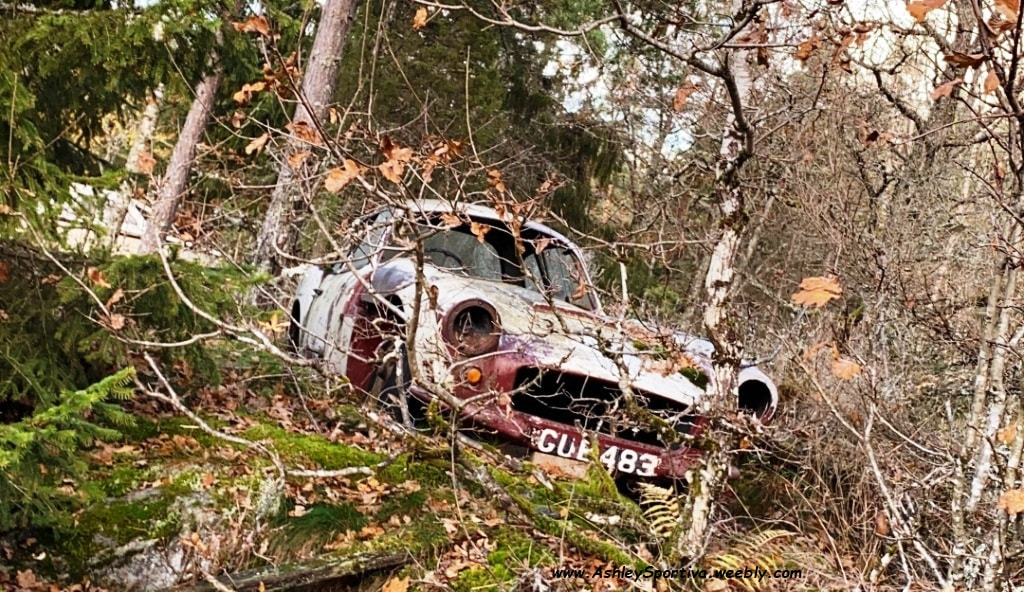 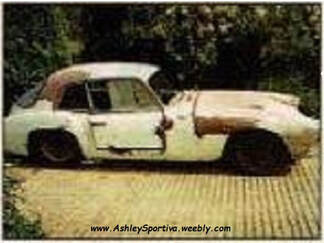 ​Compare these photo's from the Norwegian forest to the advert photo in Popular Classics to the right.

In particular the shapes and positions of the Red bodyshell
​where the paint has lifted.
To me and Jouke it looks to be the same Ashley, how and why it got
left in a Norwegian Forest is anyone's guess,
If you know or if you sold it in UK please contact me and let us know, that goes for anyone that has any information including the original builder, previous owners including Andrew Leeson,
or the Norwegian buyer.
Unfortunately the video is not compatible with this website platform.
​January 2020 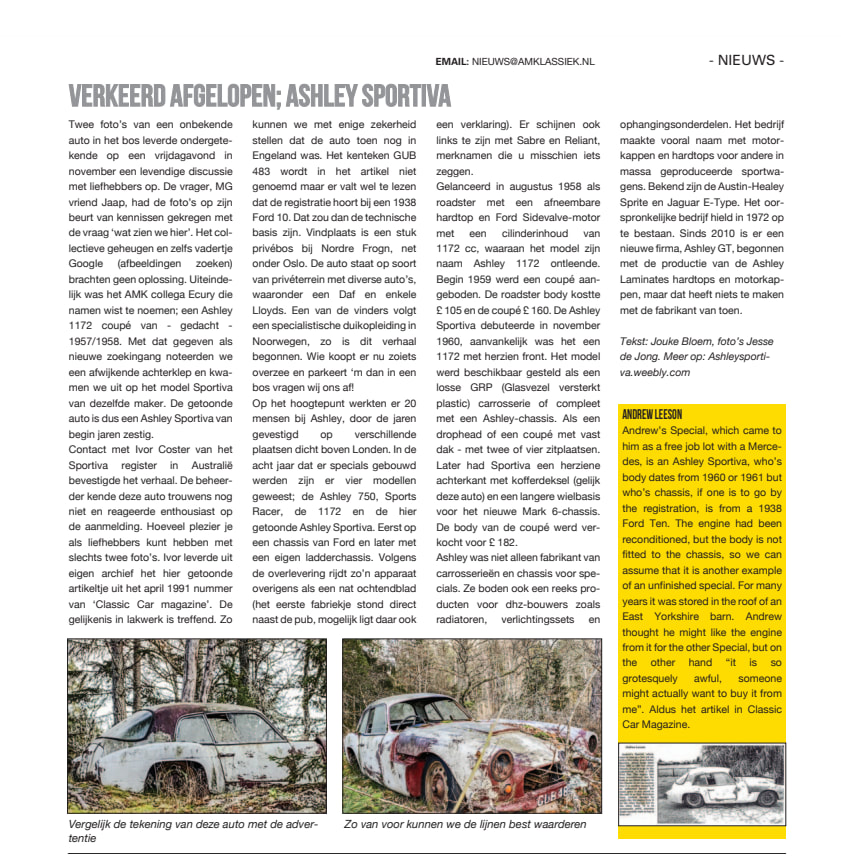 Translation of Jouke's Artical below.

Two pictures of an unknown car in the woods triggered a lively discussion with enthusiasts on a Friday evening in November. The collective memory and even google father (looking for images) did not solve. In the end the AMK colleague Ecury was able to name names; an Ashley 1172 coupé of - thought - 1957/1958.
​With that given as a new search entrance we recorded a different tailgate and we came out on the Sportiva model of the same maker. The car shown is thus an Ashley Sportiva from the early sixties.

Contact with Ivor Coster of the Ashley Online Register (who is located in Australia) confirmed the story. The Registrar did not know this car yet and reacted enthusiastically to the registration. How much fun you can have as lovers with only two pictures. Ivor delivered the article shown here from the April 1991 issue of 'Classic Car magazine', see above.

The resemblance in lacquerwork is striking. This way we can say with certainty that the car was still in England at that time. The registration plate GUB 483 is not mentioned in the article but it can be read that the registration belongs to a 1938 Ford 10, that would be the technical basis.

Vindplaats is a piece of private forest at Nordre Frogn, just below Oslo. The car is located on the type of private area with several cars, including a Daf and some Lloyds. One of the finders follows a specialist diving training in Norway, so this story has begun. Who buys something like that overseas and then parks it in a forest we wonder!

At its peak, 20 people worked at Ashley, based in different places close above London over the years. In the eight years that specials were built, there have been four models; the Ashley 750, Sports Racer, the 1172 and ashley sportiva shown here. First on a Ford chassis and later with its own ladder chassis. According to tradition, such a device drives like a wet morning magazine (the first factory was right next to the pub, possibly there is also a statement there). There also seem to be links with Sabre and Reliant, brand names that might say something.

The Ashley 1172 launched in August 1958 as a roadster with a detachable hardtop to suit a Ford Sidevalve engine with a displacement of 1172 cc, to which the model borrowed its name. At the beginning of 1959 a coupé was offered. The roadster body cost £105 and the coupé £160.

The Ashley Sportiva debuted in November 1960, initially it was a 1172 with revised front. The model was made available as a separate GRP (Fiberglass reinforced plastic) bodywork or complete with an Ashley chassis. Like a drophead or a fixed-roof coupé - with two or four seats. Later, Sportiva had a revised back with suitcase lid (similar to this car) and a longer wheelbase for the new Mark 6 chassis. The body of the coupé was sold for £182.

Ashley was not only a manufacturer of bodies and chassis for specials. They also offered a range of products for DIY builders such as radiators, lighting sets and suspension parts. The company also made a name for itself with bonnets and hardtops for other mass-produced sports cars. Well known are the Austin-Healey Sprite, MG Midget and Jaguar E-Type. The original company ceased to exist in 1972. Since 2010, a new firm, AshleyGT, has started producing copies of the Ashley Laminates hardtops and bonnets, but that has nothing to do with the manufacturer of that time.

​If you have any information about this
Ashley Sportiva car in UK or Norway or Anywhere
​
Registration No.
GUB 483

please email me
on