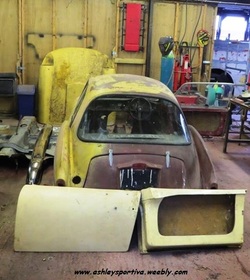 Hi my Ashley (180 YUL) is already known to you but we have just come across another pair of 1172 GT's complete with MkVI Ashley chassis we shall be restoring the later car with the Ashley chassis, fibreglass floor and fins on the rear wings as this is a rare find the cars were registered CFW 604C and 44FBM any information on these cars and particularly the suspension setup would be greatly appreciated.
Thanks Adam.

Both bodies, chassis, two spare doors and a new never been fitted pair of side windows came as a job lot found in Shropshire.
Unfortunately the Ashley with fins which should be a Sportiva has had a 1172 bonnet fitted to it. 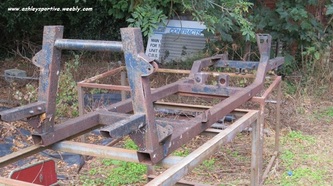 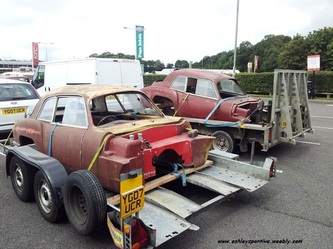 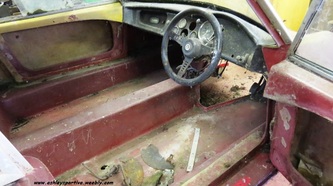 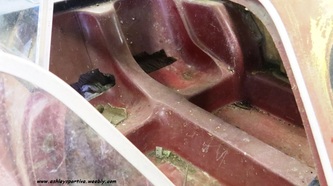 I replied to Adam telling him that I was excited about their find and that I had the Sportiva 44 FBM on my Registration Index Archive but had no other information about it other than when it was registered and that the 1172 CFW 604C was totally new to me.

Of course I asked for anymore details on the cars, additional photo's and said I would include them on the website with the hope that we could get some feedback from the internet.
Adam relied and sent more photo's stating that:

The Ashley registered CFW 604C is just a shell it looks to have been Ford based and has undergone a crude engine swap at some point looking at the gaping hole in the bonnet this is just a spare shell at the moment but maybe it will be restored in the future.

Luckily the body and chassis have remained together even though it was replaced at some stage unfortunately the chassis was bare, we are now trying to locate all the parts needed to get a rolling chassis, then the body can be mounted again.

Both bodies, chassis, two spare doors and a new never been fitted pair of side windows came as a job lot found in Shropshire.
He had bought them in a bigger job lot (not sure where from) he had intended to restore them but had too many other projects and sold me everything Ashley related.

Do you have any more information on 44 FBM's history, any information would be greatly appreciated.

So if anyone can throw some light on these two cars/bodyshell's please email me and I will pass it on to Adam and publish it on this webpage for all to see.

If you have any more information about these
Ashley 1172 & Sportiva cars
Registration Nos.
CFW 604C & 44 FBM