Photo courtesy Richard & the FSCC
I found this advert from the Classic Motor & Autojumbler magazine
dated September 1994.
It's not a very good photocopy but the Advert does show a photo of the Sportiva which would be just over 30 years old and it's low resale value,
fortunately (for me) the seller also gives the
Registration No. 10 PP
so thought it worthwhile including on a webpage.

It's interesting to see that the seller also has an
Ashley 750 bodyshell with hardtop for sale.

Photo courtesy Richard & the FSCC
I checked on the DVLA website to see if there was any record of it's Registration No. and it has obviously been re-issued as it now appears on a
2013 Silver
Audi A6 Se Tdi CVT
so know luck there.

The advert is 22 years old so I don't suppose the seller would still be using the same telephone number, which appears to be the pre 1995
​Birmingham telephone code number.
December 2016

Whilst checking out another Ashley Sportiva with Andrew on
a Facebook car group I was given a further piece of information
​about this car.

Andrew told me that Registration No. 10 PP is in Exeter and confirmed
it is now on a AUDI A6, as he had seen it that week going up
Dunsford Hill in Exeter.
Andrew a prolific and longtime car enthusiast had
spotted 10 PP on an Ashley back in the mid 1990's,
unfortunately it was in a scrapyard at Cullompton, also near Exeter.

Was it rescued or did it come to it's end in Cullumpton.

Andrew contacted me again and to confirm that 10 PP was indeed in Exeter he sent a photo of the Audi A6 parked in town.
Thanks Andrew.
​ 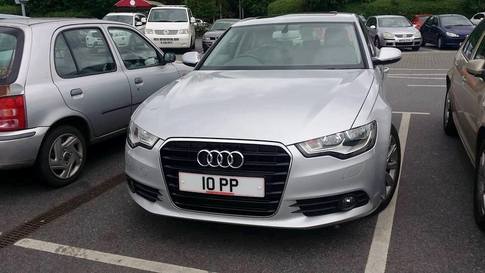 ​
So if you have any information about this
1963 Ashley Sportiva
Registration No.
10 PP

Please email me on